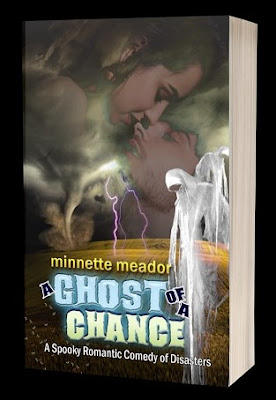 A GHOST OF A CHANCE
paranormal romantic comedy
by Minnette Meador
Excerpt - Chapter One
"This is a fantastic romp that grabbed me from the first page. Unexpected devilment filled the pages and my imagination. The author paints indelible images with words that are nothing less than stunning. There are twists and turns to keep even the most jaded reader guessing. Fast-paced, unpredictable, and funny, the dark subject matter is treated with irreverence and indisputable style. With its unparalleled originality, this novel is sure to amaze and amuse." Coffee Time Romance & More

"5 stars - Wonderful book! What a great book. The story hooks you from the beginning! I loved it. I cant wait for the next book!"

"5 stars - Wonderful book - Finished this book in one sitting. Kept me glued from beginning to end, didn't want to put it down. There was action, drama and laugh out loud humor. I highly recommend this book to any who enjoy paranormal romantic comedies because Minnette delivers in spades."

Keenan Swanson is your typical, everyday graphic designer. Well, except for the hundreds of pesky, prank-loving poltergeists that make his life interesting (in a Chinese curse sort of way). He finds his situation precarious yet manageable—until witty, smoking-hot coworker Isabella enters the scene and Keenan decides he wants her all for himself. With a horny succubus who has other ideas, a burly city cop determined to lock Keenan away, and an evil entity who’s hell-bent on using Keenan’s seed to create a living demon, the reluctant psychic realizes he just might not come out of this alive—or with heart intact. 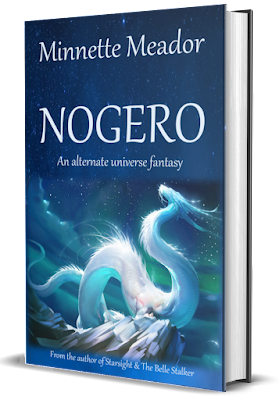 "I love this story and the world Alicia fell into. The characters seem so real. I can hardly wait to read another episode." Amazon Reviewer
A giant serpent whisks Alicia away to a paradise where rabbits are slaves, crows are politicians, and eagles serve as gods whose meddling has condemned their world to a spreading black ruin. Only Alicia's missing father can stop it, but he stands where no one can reach him, the toy of an Oo_ber_ton queen. Alicia and a small band of unlikely misfits must try, but a small insignificant creature holds the key to all their fates. 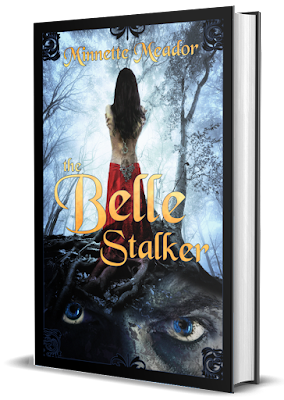 THE BELL STALKER
an urban fantasy thriller by Minnette Meador
EXCERPT - CHAPTER ONE
"5 Stars - Wow, just WOW! This is one story that surprised the heck outta me! I knew the bad guy was bad and there was going to be thrilling suspense, but I didn't see this story coming!"

"5 stars - Mystery, suspense, paranormal... This story will appeal on two levels: the police procedural and the paranormal. It's such an unusual pairing it's almost like two stories in one. Nevertheless, it works, and works well."

Belle Stark has struggled to conquer fears plaguing her since being attacked by a monster who continues to roam free. And she nearly succeeds, until she discovers her lover's mutilated body spread over the furniture, making Belle a prime suspect. Certain her attacker is to blame, she seeks help from her ex-husband, homicide detective Mike Cranston, the one person she swore she would never let back into her life... or her heart.

In their hunt for answers, the two uncover a supernatural underworld hidden beneath the tall skyscrapers of Portland and a secret that could destroy a city. Belle must surrender herself to the hands of a lunatic and Mike is forced solve an ancient puzzle before it's too late to save her--- 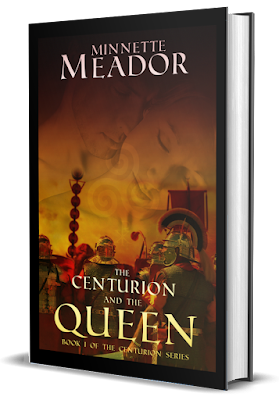 "I was engrossed by The Centurion and the Queen, and didn't put it down."--PUBLISHERS WEEKLY

"Historical novels especially historical Romance tend to fall within fairly set parameters (but) this story breaks out of those parameters...with a truly refreshing story of love in ancient Britannia."--SIMPLY ROMANCE REVIEWS

"I encourage you to try out Minnette's work and see how enmeshed you will become in her wonderful settings. ...this book pulled me in and I read it in two sittings..." --NIGHT OWL ROMANCE

Marius is disciplined, precise, as cold as his armor. A twenty-five-year veteran, the Centurion is dedicated to the principles of Rome. No one had ever dared to challenge his command… until now.

Queen Delia struggles to save her dying Celtic people, fighting to lead in a world dominated by savage men. The last thing she expects is to feel her body craving the touch of an enemy.

The revolution that sparks their desire rips her from his arms. They find themselves on opposing sides, in love, and unable to stop the future. 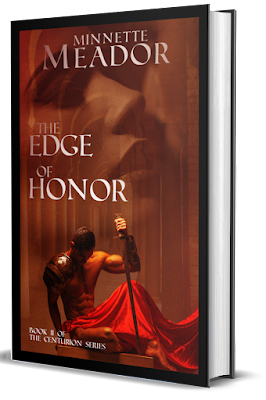 THE EDGE OF HONOR

PUBLISHERS WEEKLY - "I was engrossed by The Centurion and the Queen, and didn't put it down."

SIMPLY ROMANCE REVIEWS - "Historical novels especially historical Romance tend to fall within fairly set parameters and usually tend to be a bit cliché. This story breaks out of those parameters and destroys the clichés with a truly refreshing story of love in ancient Britannia."

FALLEN ANGEL REVIEWS - "Minnette Meador adeptly weaves in Roman and Celtic words and references [in the Edge of Honor], adding realism to this harsh world. Fans of The Centurion and the Queen will not be disappointed."

NIGHT OWL ROMANCE - "I encourage you to try out Minnette’s work and see how enmeshed you will become in her wonderful settings. …this book pulled me in and I read it in two sittings…”

The Boudicca revolt has been squelched; the tribes of the Iceni and the Trinovantes have been exterminated by the Roman Governor of Britannia, Suetonius. He has sworn his revenge on the remaining tribes for the Celtic insolence. Marius gave up his allegiance to Rome for the woman he loves, but now must fight to save her dying people. In the end, it may be more than their love or their lives they lose. 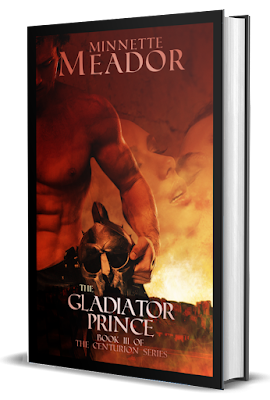 "5 stars - A must read Minnette will have you snared from the beginning of the book. You will think that you can figure out the secrets, but you will be surprised. An EXCELLENT read."

Prince Thane is the last surviving royalty of the Trinovantes Tribe in Roman Britannia, having surrendered to the Romans to save his two young daughters, whose identities he sacrifices his freedom to protect. He is condemned by Nero himself to become a gladiator, to fight until he dies in the arena. When his two daughters are taken in a slaver's raid, Thane escapes to find them.

Phaedra holds a terrible secret that would mean the death of her younger brother. Her only hope is to force the gladiator to protect them as they flee to Rome. He reluctantly agrees. Little does he know that the beautiful Syrian woman holds not only the key to his passion but a secret that triggers a disaster that ignites the world. Will this spoiled willful girl betray him in the end or sacrifice herself to save them all? 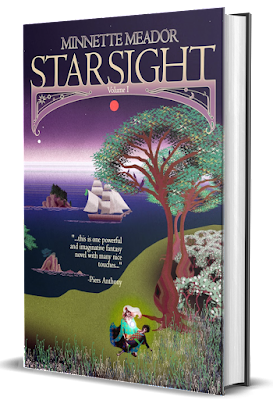 STARSIGHT I
an epic fantasy
by Minnette Meador
Excerpt - Chapter One

Trenara never thought she would have to guide a student she loved to become a messiah, but it is the only way this second trial Starguider can salvage her world.

“[Starsight] is one powerful and imaginative fantasy adventure novel with many nice touches...there is magic galore, and challenge galore; nothing comes easy. It's the first of a series, and it should do well...” Piers Anthony

"Great characters. It wasn't till I picked up my copy of Minnette Meador's "Starsight," mailed freshly minted, signed and personalized by the author, that I realized how long it was since I'd enjoyed a fantasy (unless Harry Potter counts). I tried George R.R. Martin's books recently, but couldn't get into them - the short reading sessions of a busy life meant the story became too disjointed for me to follow. But Minnette has quickly rekindled my love of the genre."

"Starsight is just the beginning - I was so tired of the fantasy genre - until now. Starsight by Minnette Meador is a masterfully crafted story. I was totally involved by page three and unable to stop reading. This is rare for me, so recommend this book highly! I've already read the second volume, StarSight II and am even more impressed!

"STARSIGHT-Entertaining from start to finish - STARSIGHT is quite the epic fantasy, which I hardly ever read, as I've always been grounded in reality and never had time for frivolity. But STARSIGHT is not frivolous... the characters are richly human, and their struggle between good and evil ranks with the most creative in literature." 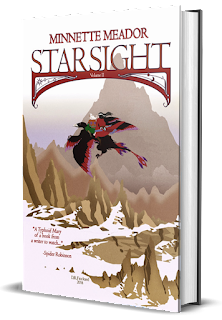 “This is a Typhoid Mary of a book, from a writer to watch." Spider Robinson

Trenara no longer trusts the power that has turned the boy she once loved into a man she no longer understands. He frightens her. Will Joshan use the power to rescue his world or will a new tyrant sit upon Sirdar’s throne? Second volume in the Starsight Series

NOGERO, An Alternate Universe Fantasy I am very happy to announce that Nogero, an alternate-universe fantasy, is being released on my birt... 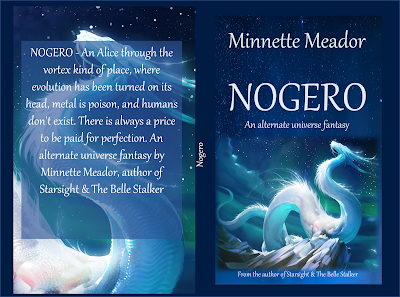